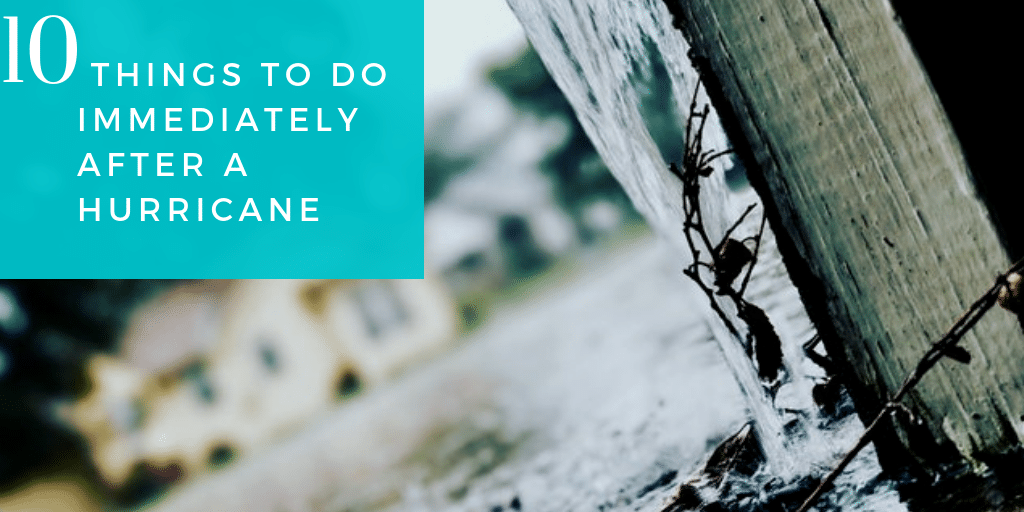 Dorian is almost upon us!

But we’ve dealt with worse, however it’s a good time to reiterate hurricane preparedness and what to do.

While not everyone now has the luxury of getting flood insurance or homeowners insurance after the fact, there are some things to do whether you have certain insurance or not. Here’s a checklist of things to do after a hurricane has come through your home or neighborhood.

#1. Stay informed. Make sure you know what’s going on. Have either a radio or television close by so that you can stay informed when local authorities have declared your neighborhood safe. There may be certain roads flooded during the hurricane and you may not have access to your home at all. Don’t get stuck in the water and cause more problems. Wait until the roads are clear and plan accordingly. You’ll want to watch out for any road hazards and take heed to detour signs. Even a couple inches of water can leave your car stranded.

#2. Be aware of any fallen electrical lines. Don’t drive over them or through any water that may contain down to lines. This may be hard to see, but again, if you’re not driving through water, you won’t be driving through an unnoticed powerline either. Also, don’t remove any trees until it’s safe to do so.

More: How to Safely Clean Up After a Storm

#3. Approach your home carefully. Don’t turn on the power if it’s currently off. Do not use matches after a storm has ravaged the area until all gas lines have been checked for leaks. You may want to have a professional conduct an inspection first, especially if there has been major damage to the house, plumbing, or electrical.

#4. Take pictures. Homeowners insurance and flood insurance usually want pictures of the damage. You’ll need to document as much as possible. It makes insurance claims process faster and easier. This also helps to have a home inventory list of items in the house and valuables.

#5. Conduct emergency repairs first. Do only what’s necessary to prevent further damage such as covering broken windows with plastic or roofs with tarps. I know it’s tempting to start the cleanup process, but your insurance adjuster may need to see the damage before they can settle your claim.

#6. Start the claim process immediately. Insurance companies work on a first-come, first-served basis, so it’s in your best interest to file an insurance claim as quickly as possible. Contact your provider and let them know the extent of the damages.

Related: How to Assess Home Damage After a Storm

#7. Be careful of electrical equipment and appliances. You can use portable, gas-powered electric generators outside on a dry and level surface and never hook up the generator to your home’s electrical wiring.

#8. Wear protective clothing and gear. Heavy-duty work gloves, watertight boots, hardhats, and even goggles or face shields can help, especially if you’re near asbestos, chainsaws, dryers, dangerous tools, or anything that might be hazardous for you to inhale or have contact on your skin.

#9. Take care of animals. Whether they are your own animals or stray domestic pets, they can be disoriented just like humans after a natural disaster. If you don’t know the animal, call your local animal control office to deal with disoriented or stray pets. There could also be an increase in rats and other rodents feeding off spoiled food or dead animals. Contact animal control authorities to find the best way to dispose of dead animals or how to remove these animals from your property.

#10. Destroy or dispose of anything that may not be safe. Only bottled water should be used for eating and drinking and tell local authorities verify that tap water is safe to use again. Any spoiled food or previously frozen meat should be completely destroyed and check for other signs of mold and spoilage in refrigerators and freezers.

What Will Homeowner’s Insurance Cover?

It’s important also to understand what is covered and what is not covered under your homeowner’s insurance. Typically, damage from flooding, earthquakes, mudslides, and sinkholes are excluded from homeowners insurance. You may need to get a separate policy with the National Flood Insurance Program or a private insurer. Some policies may also exclude some coastal states so it’s important to check on your policy to see that it covers everything you own in an area in which you live.

So what happens if you have things that are not covered?

Make sure you keep all of your records and document items. Take pictures of valuables and how rooms are arranged so that you know all of your furnishings and how to replace things. If you’ve recently improved upon anything in the house such as a new water heater or roof, make sure you have an inventory of all the documents, receipts, and photos if possible.